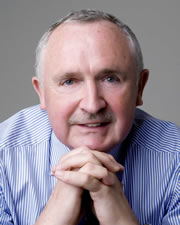 Des Collins is founder and Senior Partner of Collins Solicitors, specialising in civil litigation. Since qualifying in 1975, Des has earned an exceptionally high profile both within and beyond the legal industry due to his involvement in high profile cases. These include the firm's able representation of rail crash victims at Public Inquiries following both the Southall and Paddington disasters.

It was Des who directed the firm's involvement in the Buncefield Oil Terminal Fire and Explosion litigation at the Commercial Court in 2008, when the firm represented over 250 affected families who are still seeking compensation

He subsequently led and finalised the landmark negligence claim against Corby Borough Council in Northamptonshire, on behalf of children suffering significant birth defects because of their mother’s exposure to toxic waste during the demolition of the British Steel Works in Corby. The case, held as the UK equivalent of the Erin Brockovich case, ran for over eleven years. In recognition of his sterling work he was awarded 'Outstanding Case of the Year' at the Personal Injury Awards in 2009.

Further peer and industry accolades arrived in October 2010 when Des was named Law Society Gazette Legal Personality of the Year at the Law Society Awards while in November 2010 he was named ’Claimant Personal Injury Lawyer of the Year 2010’ at the Personal Injury Awards 2010. Des won the prestigious Innovation Award 2011 and in the same year voted in the Hot 100 Lawyers.

Des is currently leading the firm’s work on a significant toxic waste case in Scotland where it is believed residents’ health is at risk because of potentially contaminated land.