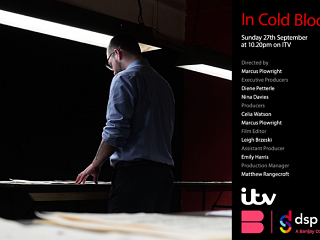 Des Collins, senior partner of Collins Solicitors, will feature in an ITV documentary to be aired this weekend on Sunday 27th September at 10:20pm.

The 90 minute programme “In Cold Blood” , made by award winning director Marcus Plowright, takes a historic look at the infected blood scandal which we have worked on as a firm since 2017.

It will hear from several victims and families, including our client Factor 8 campaign group founder Jason Evans, whose father died of HIV when he was four years old, and clients Colin and Denise Turton, who tragically lost their son aged just 10 as a result of infected blood products.

The film looks at how authorities in the UK were warned about the potential risks of using infected blood products, yet thousands of patients continued to be treated this way during the 1970s and 80s so becoming infected with HIV and Hepatitis C. It further examines claims of a systematic cover-up.

Des Collins says: “Together with the community we are grateful to the award winning DSP Director Marcus Plowright for forensically looking at this issue and to ITV for bringing this to their channel.

“The Contaminated Blood Scandal is one of the worst treatment scandals this country has ever seen and the persistent attempts to ignore warnings from medical and scientific experts will shock viewers to the core.

“Those who have suffered deserve for their story to be heard. Ultimately too they deserve financial compensation but sadly that is not in ITV’s gift, that it what we will continue to fight for through the courts and through government channels. “

The ITV programme comes in the wake of the Infected Blood Inquiry reopening this week with evidence from former Health Minister Lord David Owen. The Inquiry is Chaired by Sir Brian Langstaff and is the largest ever UK public inquiry.